Thérèse Martin was born in Alençon, France on January 2nd 1873.  She was the ninth and youngest child of Louis Martin and Zélie Guèrin, but four of them had already died before her birth so she grew up as the youngest of five girls.  When she was four her mother died from breast cancer and Thérèse chose her sister Pauline as her ‘little mother’. Three months later the family moved to Lisieux to be near Zélie’s brother and his family.
Before her mother’s death Thérèse had been an outgoing independent child, but the sorrow she suffered completely changed her so that she became quiet and withdrawn except with her own family.  After the move to Lisieux,  Thérèse’s eldest sister and Godmother, Marie taught her to read and Pauline gave her other lessons.
Her sisters, Léonie and Céline went to the Benedictine school.  When Thérèse was eight Léonie left school and Thérèse took her place going each day with Céline and their cousins Jeanne and Marie.  Thérèse never liked school she found it difficult to make friends with the other girls, but she was good at her lessons especially composition and history, she was also one of the best in the catechism and Bible history class so the Chaplain sometimes called her his ‘little doctor’.

When Thérèse had been at school for a year Pauline decided to follow her own vocation to enter Carmel. This came as a terrible shock for Thérèse who relied on her sister for everything.  It was like losing her mother all over again and she became ill, so ill that the family thought she was going to die.  Then one day when she was especially sick they all prayed before a statue of Our Lady which was beside Thérèse’s bed.  Suddenly it seemed to Thérèse that the statue came to life and Our Lady gave her a beautiful smile.  Thérèse know that she was cured and from that moment she began to get stronger.  She was able to return to school and received her First Holy Communion.   Thérèse had been longing for that day and she called it the most beautiful day of her life.  The next month she was confirmed.

Already Thérèse felt that God was calling her to Carmel.  She longed to enter but was concerned because ever since her mother’s death she had been very over sensitive, crying at the slightest thing.  When she was 14 she received what she called her Christmas Grace Thérèse was still following the custom of French children, leaving her shoes in the hearth to be filled with gifts.  On their return from Midnight Mass her father remarked that he was glad this would be the last year, implying that by this time Thérèse should have outgrown the custom.
This would have been enough to send her into floods of tears, but as she put it Jesus did in an instant what she had been unable to do in ten years and she knew that she had left her childhood behind.  Thérèse writing about this night said, ‘I felt charity enter my soul, and the need to forget myself and please others; since then I’ve been happy!’

She resolved to enter Carmel at the age of 15 and at Penetcost she obtained her father’s permission. It was on this occasion that he gave her a little white flower which would later become the symbol of her life.  The Ecclesiastical Superior of Carmel was not at all in favour of such a young postulant so Thérèse appealed directly to the bishop, but he wouldn’t commit himself so Thérèse resolved to ask Pope Leo XIII for permission.  She was going to Rome on Pilgrimage with her father and sister, Céline and this included an audience with the Pope.
Although the pilgrims had been forbidden to speak to him Thérèse asked his permission and his wise answer was ‘Do as your superiors tell you; If God wills it you will enter’.  The permission came on New Year’s day.  The next day was Thérèse’s fifteenth birthday.  She entered the Carmel of Lisieux on April 9th 1888.  She was clothed in the habit on January 10th the next year and made her Profession on September 8th 1890. By the time she entered Thérèse’s eldest sisters, Marie and Pauline were both nuns in the same monastery and after their father’s death in 1894 Céline joined them there.  Léonie later entered the Visitation Monastery in Caen. 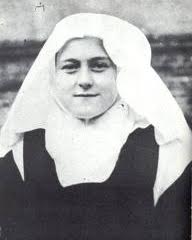 Thérèse was very happy to be in Carmel but she did not find the life easy.  One of her duties was sweeping the cloister and as she had not been used to housework she found this difficult especially when there were cobwebs as she had a fear of spiders. In winter her greatest difficulty was the cold, she later said she thought she would die of it.  There was only one fire in the community room.  One winter evening, soon after Céline entered Carmel, Thérèse was warming herself by the fire with her three sisters and she began recalling memories of her childhood.  Marie thought it was a pity her memories weren’t in writing and suggested to Pauline, who was prioress, that she should order  Thérèse to write them down.  She did so and Thérèse spent all her free time the next year writing her early memories in a school exercise book. This later became the first part of her ‘Story of a Soul’.  1895 was a very significant year for Thérèse, as she discovered her ‘Little Way’ of confidence and love sometimes called the way of spiritual childhood. She also came to realise how much God wants to be loved and she made an offering of herself to his Merciful Love.  By this time Thérèse was helping to instruct the novices and she taught them her way of trust and abandonment to God.

The next year on the night of Holy Thursday on returning to her cold cell after watching at the Altar of Repose, Thérèse felt her mouth fill with blood and she wondered if she was going to die.  The reality of Heaven was so vivid for her that she was filled with happiness, but very shortly afterwards she was plunged into darkness.  All sense of Heaven left Thérèse and she said she could understand how atheists felt.  In spite of her spiritual darkness she wrote poems full of faith and love. In September she wrote the second part of her ‘Story of a Soul’ in the form of a letter to her sister Marie who wanted to understand Thérèse’s ‘Little Doctrine’ as she called it.  The final part of ‘Story of a Soul’ contained Thérèse’s account of her life after she entered Carmel and was written for Mother Marie de Gonzague, the Prioress who was in office when she entered and again after Pauline’s first term of office.

Thérèse had been asked to pray for two young seminarians, Maurice Bellière and Adolph Rouland  who were preparing to be missionary priests, she looked on them as her brothers and wrote letters of encouragement to them.  In one of her last letters to Maurice she wrote, ‘I am not dying I am entering into life’.

In July 1897 Thérèse told Pauline that after her death she would help others to love God as she loved him.  She wanted to spend her Heaven doing good on earth and was confident that God would grant her desire.

Thérèse died of tuberculosis on September 30th her sisters gathered round her in prayer and looking at her crucifix she said, ‘Oh how I love him, My God I love you’. These were her last words.

Thérèse was buried in the Lisieux cemetery on October 4th.

Click here for more information on Sr. Thérèse and her family in the archives of the Carmel of Lisieux.