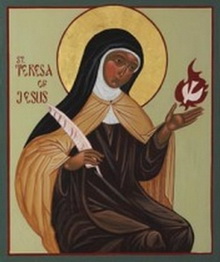 St. Teresa was born in Avila, Spain on March 28th 1515.  Her father, Alonso Sánchez de Capeda had been widowed after only three years of marriage but married a second time to Beatriz de Ahumada.  Teresa was the third child of this second marriage.
The family belonged to the lower ranks of the nobility, and had many servants, though unlike most of his class Teresa’s father refused to have slaves.  He had a wide taste in literature and ensured that his children were well educated.
Teresa’s mother taught her the faith, and introduced her to the lives of the saints as well as to the tales of chivalry that she liked to read, even though Teresa’s father disapproved of them.  Teresa’s mother died when she was 13 and soon afterwards, she asked Our Lady to be her Mother.

Teresa was an attractive, vivacious girl with curly chestnut hair and large dark eyes. At 16 she was experimenting with hairstyles and makeup, trying on her late mother’s gowns and reading her books of chivalry, taking care to hide them from her father, but happily playing chess with him at his wish.  However her father thought that she would benefit from the restraint of a convent boarding school and sent her to the Augustinian nuns for about eighteen months. While she was there Teresa began to consider religious life herself. She was still undecided when she became ill and left school.  Shortly afterwards, influenced by good spiritual books that she read in an uncle’s home, she made the decision to enter the Carmelite Monastery of the Incarnation at Avila.  She received the religious habit in 1536.  Again she became ill and spent some time in the care of her family before returning to the monastery, still unable to move very much for nearly three years.  The debilitating illness led her to give up prayer and it was only in 1554 that she again gave herself fully to God.  She always regretted this and later encouraged her nuns to be faithful to prayer whatever was happening in their lives.    The turning point came for Teresa when she saw a statue of the wounded Christ which touched her heart.  From then on she began to receive mystical graces and she developed a close and loving relationship with Christ.  Teresa resolved to live her religious life as perfectly as possible but this proved difficult at the Incarnation where she was frequently called to the parlour.  It was a very large community and Teresa together with some young nuns had the idea of founding a smaller community where they could live a life more dedicated to prayer.  Teresa began to make plans to found a small new monastery where the nuns could practise greater solitude and silence, following in the footsteps of the early hermits who first observed the Carmelite Rule.

The foundation of St. Joseph’s Avila, the first monastery of the reform, was fraught with many difficulties but the Lord overcame them all.  Teresa had a vivid experience of God one day after Holy Communion and he told her that he would be very well served in the new monastery, where Our Lady and St. Joseph would guard the doors.  This gave her the courage to go ahead in spite of the many problems she encountered.

Teresa founded a total of seventeen monasteries for nuns all over Spain as well as beginning the reform of the friars together with St. John of the Cross.
In addition to her work as reformer of Carmel Teresa wrote extensively on prayer, to instruct her nuns and in obedience to her confessors.
Teresa, whose health was never good, travelled many miles to make her foundations.  The last monastery she founded was at Burgos, after which she intended to return to Avila.  On September 20th 1582 she stopped at the monastery of Alba de Tormes with her faithful nurse Sr. Anne of St. Bartholomew, but by this time she was too ill to travel further and she died there on October 4th 1582.

St. Teresa was made a Doctor of the Church in 1972 , together with St. Catherine of Sienna, the first women to be given this title, now shared by St. Thérèse of Lisieux, another Carmelite whose feast is celebrated on October 1st.