St. Teresa Margaret was born on July 15th 1747  and baptised Anna Maria on the day after her birth, the feast of Our Lady of Mount Carmel.  She was the second of fourteen children born to Camilla and Ignatius Redi in Arezzo, Italy.  The family lived in a beautiful villa, adorned with religious frecos and surrounded by delightful gardens and orchards.

From an early age little Anna Maria gave herself completely to God, no doubt influenced by the religious atmosphere which pervaded her home.  Her father recognised that God was calling her in a special way and took it on himself to guide her.  It was he who taught her devotion to the Sacred Heart. She later said that her father had done so much good to her soul she could claim him as a father twice over.

When she was nine Anna Maria was sent to the Benedictine School of St. Apollonia in Florence. The sisters, recognising her prayerful spirit, allowed her to receive her First Communion a month after her tenth birthday, which was a year earlier than usual.

One day when Anna Maria was nearing the time to leave school, a past pupil, Cecilia Albergotti, called for a farewell visit as she was about to enter the Carmel in Florence. As she returned to her room after this visit, Anna Maria heard the words, ‘I am Teresa of Jesus and I want you among my daughters’.  Somewhat bewildered she went to the Chapel to pray for guidance and almost immediately she received confirmation of the authenticity of her experience.  She resolved to leave school and enter Carmel as soon as it could be arranged.

After a few months with her family she too applied to enter the Carmel at Florence.  She was accepted and entered on September 1st 1764.  On March 11th the next year she was Clothed in the Carmelite habit and given the name Sr. Teresa Margaret of the Sacred Heart.  She had great devotion to the Sacred Heart, and had intense experiences of the love of God.  The phrase ‘God is Love’ delighted her.

When commenting on the words from St. John’s Gospel. ‘‘No one can come to the Father except through Me’, she said, ‘This our God and our loving Father is All.  He is the beginning of everything, and this love is God Himself. The mirror we have to consult to arrive at divine union is the Sacred Heart of Jesus crucified.’

She longed to be ‘Hidden with Christ in God’ which she sometimes expressed as a desire to hide herself in the Sacred Heart as in a desert.

As she entered more deeply into prayer Sr. Teresa Margaret also grew in charity.  While she was still a novice she was given permission to care for one of the older nuns.  At the end of 1766, about six months after Sr. Teresa Margaret’s Profession, this nun died. For a short time there was no longer need of an extra infirmarian but as the winter progressed the community suffered from a severe epidemic of influenza.  Again Sr. Teresa Margaret offered to help care for the sick and she was left in the office of infirmarian until her death.  She was ideally suited for this office, with her calm, cheerful disposition and ease of communicating with the sick, even those who were deaf or confused.  She seemed to have endless stamina and always showed great kindness to her sisters, even though she sometimes found it difficult.

Her sudden death at the age of twenty-two came as a great shock to her community.  On March 6th she was late into the refectory for her evening meal, having been delayed by her infirmary duties; so she was eating alone, when she was seized by a sudden pain.  A doctor was called but it appeared to be only colic.  Everyone expected that she would be better the next day, but the spasms became worse and she died in the evening of March 7th  1770.

It seems likely that she died of a strangulated hernia and her body was so discoloured the nuns were anxious about leaving her coffin open in the choir, but as the procession made its way to the chapel, her natural colour returned and within two days her body appeared as if she was sleeping. 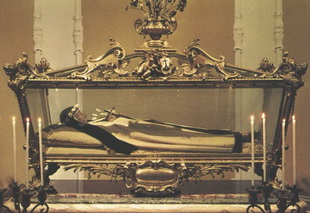 Her incorrupt body still rests in the Carmelite Church.