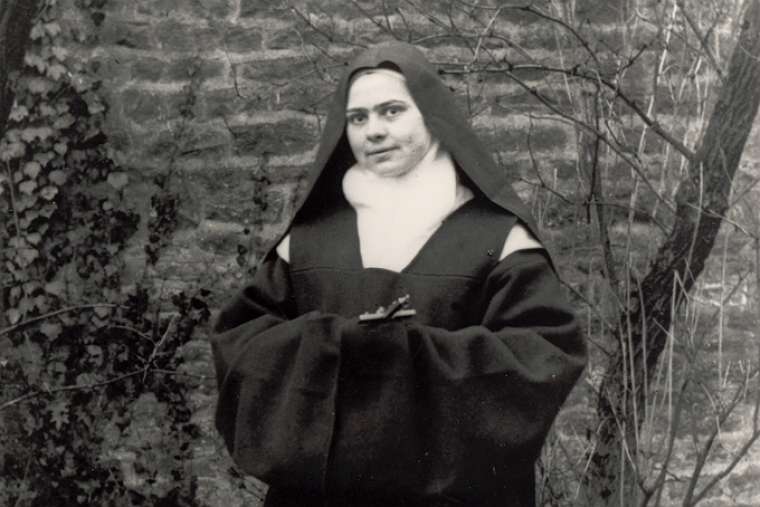 St Elizabeth of the Trinity

Elizabeth was born on July 18th 1880 at the army camp in Avor near Bourges in France, where her father was a captain. She was baptised four days later on the Feast of St. Mary Magdalene, a fact which she treasured. When she was 2½ her sister Marguerite, known as Guite, was born. Elizabeth’s father died when she was only seven years old. By this time the family was living in a camp in Dijon, but after the captain died, they moved into a flat. Elizabeth could see the Carmel of Dijon from her bedroom window. She was very high spirited and given to fiery outbursts of anger when things did not go her way. In 1891 Elizabeth received her First Holy Communion and it made a deep impression on her. From this time on the Eucharist became the centre of Elizabeth’s life and it gave her the strength and determination she needed to make a real effort to overcome her rages.
When she was eight Elizabeth’s mother enrolled her in the Conservatoire, probably

with the intention of preparing her to teach music. Elizabeth practised the piano for several hours each day; she was an exceptionally gifted pianist. She often played in concerts and when she was thirteen she won first prize for her playing. She could undoubtedly have gone on to become a concert pianist, but God had other plans for her.
Around the time of her fourteenth birthday Elizabeth made a vow of virginity, as an act of total self-offering to God. She had already felt the call to religious life and one day after receiving Holy Communion she became convinced God was calling her to Carmel.

Meanwhile she spent happy holidays with her mother and sister. Elizabeth dressed in the latest fashions, enjoyed dances and loved walking in the country, where she appreciated all the beauties of creation. She had a great gift for friendship and was popular with her peers, but in everything God was at the centre. She said that when she played the piano she forgot all about the audience and played only for him.
Elizabeth had a natural gift for contemplative prayer, people remarked on her total stillness and said that she seemed ‘Lost in God’, but she was active in her parish too. She taught catechism and ran a club for the children of workers in a tobacco factory; she visited the sick and sang in the parish choir.

Elizabeth entered the Carmel of Dijon on August 2nd 1901 and on December 8th Feast of the Immaculate Conception, she was clothed in the Carmelite habit.

Elizabeth was full of joy as a postulant; she found God everywhere, in her work as well as at prayer. She loved the silence of her cell where she could listen to him speaking to her in the scriptures. Her novitiate year was not so smooth, as with her great desire for perfection she struggled with scruples. Elizabeth lived in pure faith, during her novitiate; it was a purification which strengthened her and gave her courage. Mother Germaine, at 31 was Elizabeth’s prioress and novice mistress. She understood Elizabeth and emphasised the way of confidence in the merciful love of God, as expressed by Thérèse of Lisieux in her Story of a Soul, which had been sent to the Carmels as Thérèse’s obituary circular about three years before Elizabeth entered.

Elizabeth made her Profession as a Carmelite on January 11th 1903 and on 21st Feast of St. Agnes, she received the black veil in a public ceremony.
Elizabeth shared in her sister’s joy when she married and again later when she had her first two children. Seeing her sister so happy and devoted to her husband, made Elizabeth reflect on her role as spouse of Christ. She wanted to love him with an undivided heart, to stay with him all the time in deep communion; to share in his redemptive suffering and prayer, and so become fruitful, by nourishing others and drawing them to him.
Elizabeth’s horizons were expanding; as she pondered the scriptures she felt she was being transformed into another humanity for Christ, an idea which she developed from Paul’s text ‘It is no longer I who live but Christ lives in me’ She had an intuitive grasp of the ‘universal call to holiness’ long before it was named in the Church.

Elizabeth also had a strong awareness of the indwelling of the Trinity. She often called the Trinity ‘My Three’ and had an intimate relationship with Father, Word and Spirit, as she usually called them. Later she discovered her vocation to be a ‘Praise of glory’ and sometimes she even signed herself by this name.

Around the time of her twenty-third birthday it became clear that Elizabeth’s health was failing, she had developed Addison’s disease, at that time incurable. It led to her death at the age of 26 on November 9th 1906. By this time she was fully surrendered to God and died saying, ‘I am going to Light to Love to Life!’

SAINT JOHN OF THE CROSS

END_OF_DOCUMENT_TOKEN_TO_BE_REPLACED

BLESSED MARY OF THE INCARNATION