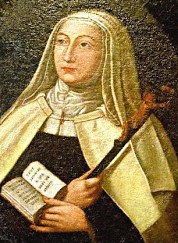 She was born Barbe Avrillot on February 1st 1566 and baptised the next day.  Her father, Nicholas Avrillot, was accountant general in the Chamber of Paris and chancellor to Queen Margaret of Valois.  Her mother, Marie Lhuillier was also from the upper class of Parisian society.   Barbe was educated by the Franciscan nuns of Longchamp.  The girls were taught to read and to sing and they joined in most of the Divine Office with the nuns.  Barbe always felt drawn to religious life but in obedience to her parents’ wishes she married Pierre Acarie in 1582.  He was a rich young man from Parisian high society but he was also a committed Catholic.  They had six children and Barbe proved to be an excellent wife and mother.

After the birth of her second child Barbe read some words of St. Augustine which made a great impression on her, ‘He is indeed a miser to whom God is not enough’.  It was after this that she began to have mystical experiences, which worried her a great deal at first, but gradually she gained more control and could be resting in God at the same time as she was involved with her family or her other works. 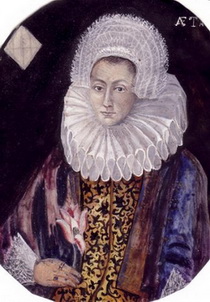 Barbe’s husband Pierre Acarie became an active member of the Catholic League which opposed the Huguenots and although he never joined in the violent activities of some of the members, when Henri IV took possession of Paris, he, like many others in the League, was ordered to leave the city.  However, he was able to choose his place of residence and went to the charterhouse in Bourgfontaine.  Unfortunately his zeal for his faith had outstripped his prudence and he had recklessly lent money to other members of the League.  As Pierre was 45 miles from Paris, Barbe found herself faced with sudden debts and had to hand over most of her possessions to pay them off.  She sent her four eldest children away to school and the two youngest to stay with relatives while she went to stay with her cousin Mme Bérulle mother of the future cardinal, who was then a student at the Sorbonne.He was nine years younger than Barbe and although they already knew each other they grew closer and found mutual support and encouragement, as each became more completely dedicated in their spiritual paths.

Barbe never criticised her husband for his reckless ways and her love for him never faltered in spite of all the hardship he had caused her. She travelled the 45 miles to Bourgfontaine to see him.  While there he was captured by bandits and she raised the ransom to free him and also arranged his transfer to the Chateau at Luzarches, which was much closer to Paris.  There she was able to see him far more frequently until on returning from one of these visits her horse stumbled and left her with a broken hip. The next year she fell on a step and fractured her thigh, and a third fall of a similar nature followed soon afterwards. These accidents caused her to remain lame for the rest of her life.  Meanwhile, after many legal struggles she had sorted out Pierre’s affairs and soon afterwards the family was reunited in their old home.

Barbe became known all over Paris for her great charity to the sick and poor. Her works were many and varied, among other things she opened a refuge for prostitutes who wanted to make a new start in life and she made vestments for missionaries.

By the beginning of the seventeenth century the Acarie home was a gathering place for clergy and devout laity alike.  Many came to ask Barbe’s advice.  She always accommodated clergy who wanted to stay for convalescence after an illness. Her cousin, Cardinal Pierre Bérulle, was a frequent visitor, others included St. Francis de Sales, who was Barbe’s spiritual director for a short time, and St. Vincent de Paul. High society ladies, including Mme. Jourdain, Mme de Bréauté and others who later became Carmelites, were also visitors to the Acarie household. 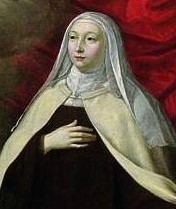 In 1601 Abbé de Brétigny’s translation of Ribera’s life of St. Teresa was published.  After Barbe had begun reading this St. Tesesa appeared to her and told her that God had chosen her to found Carmels in France.  Barbe consulted with her friends and advisers but they felt that the time was not right and advised her to abandon the idea or at least leave it aside for a time.  She tried to do that but eight months later St. Teresa appeared to her again and assured her that the difficulties would be overcome. Barbe approached the Duchess of Longueville asking her to be the foundress which in fact meant financing the project and also getting the necessary letters patent from the king.  She eventually succeeded in this and Barbe persuaded her friends and advisers to support her.  St. Francis de Sales wrote to Pope Clement VIII to obtain his permission to found monasteries of Discalced Carmelite nuns in France under the jurisdiction of secular clergy as there were no Carmelite Friars in France at that time.  They all considered it essential to bring nuns from Spain who had known St. Teresa, so that the French Carmels would be authentically Teresian.  Gradually the difficulties were overcome as St. Teresa had predicted.  The Pope sent authorisation for the new monastery which was built  in Paris and Barbe gathered a group of future postulants together. Abbé de Brétigny travelled to Spain to bring back Spanish Carmelites who had known St. Teresa, but he was initially refused, so he called on Barbe for advice, she sent her cousin, Pierre de Bérulle to help him and together with some ladies of the nobility they returned with six of Teresa’s best nuns including Anne of St. Bartholomew and Anne of Jesus.  Two Spanish Carmelite friars accompanied them and gave the habit to the first French novices. The Spanish nuns all went to the newly built Paris Carmel in 1604 but more foundations followed and Barbe was much involved in those at  Pontoise in1605, Dijon in 1605 and Amiens in1606. By the time of her death 12 years later there were fourteen Carmels in France.  Barbe’s three daughters all became Carmelites.
Among the young women Barbe had gathered together to train as future Carmelites she found that some  clearly did not have a Carmelite vocation, yet they were dedicated women sincerely seeking to serve God.  It occurred to Barbe that they would make excellent teaching sisters, so she set about founding the Ursulines in Paris convinced that if girls were taught their faith well they could reform morality in the country, as most of these girls would go on to be mothers and would pass on the teaching to their children.

Very soon after her husband, Pierre Acarie, died in 1613,  Barbe settled her affairs and asked to enter Carmel as a lay sister, she wanted to go to the poorest monastery and entered at Amiens where her eldest daughter was sub-prioress.  She took the name Sr. Mary of the Incarnation and made her solemn profession on April 8th  1615, but her health had deteriorated a great deal.  She only lived five years after Pierre’s death.  Barbe was sent to the Carmel at Pontoise,  as the superiors thought it might be beneficial for her health, but she died there on the Wednesday of Easter week, April 18th 1618. Sister Mary of the Incarnation was beatified on June 5th 1791. Her Feast Day is kept on April 18th  in Paris and in the Carmelite order.