Anne was born in Almendral, a village in Castile, Spain in October 1549.  She was the youngest of seven children born to Ferdinand García and Maria Mancanas, who were landowning farmers. They were a very devout couple who took their children to daily Mass and said family prayers each day.  Anne was baptised on the day of her birth. Ferdinand García confided the spiritual care of his children to a priest who gave them a daily lesson in Christian doctrine.  Anne also learnt to read in Spanish but she was not taught to write.  Prayer came to her naturally.

Even as a very young child Anne had a great love for Jesus and wanted to please him in all she did; she often felt him very near to her. She liked to talk to Our Lady, St. Joseph and the Saints and every day she asked them to keep her free from sin, but she also enjoyed playing with other little girls and was especially close to her cousin Francesca García, a girl of her own age, who also became a Carmelite.

When Anne was ten both her parents died from a plague which swept across Castile; but she was able to remain in the family home with her older brothers and sisters. She worked as a shepherdess, minding her brother’s sheep.  Her brothers and sisters wanted to arrange a marriage for her but she had desired to be a nun from an early age. She had a number of dreams and visions in which she was directed to the newly founded discalced Carmelite monastery in Avila and eventually she was accepted there. 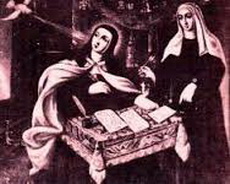 She entered in 1570 at the age of 21, taking the religious name Sr. Anne of St. Bartholomew and becoming the first discalced Carmelite lay sister. She made her profession on August 15th 1572 and was given the duty of infirmarian.  In 1574 Anne went with St. Teresa to Valladolid and Medina del Campo. After that she became ill herself and was unable to travel for two years, but Teresa thought very highly of Anne and in 1577 she became her secretary and nurse.  In the last five years of her life Teresa needed help with her large correspondence as she was often too tired or too ill to write herself, but she was able to dictate her letters.  Anne had still not learnt to write, so Teresa gave her two lines of her own handwriting and told her to learn. In one afternoon Anne persevered and obeying Teresa’s directive she learned to write; this was cited as one of Teresa’s miracles in the process for her beatification, though it is true that, since Anne could read, she was  already familiar with letters, which no doubt helped her learn to write. In the last years of Teresa’s life Anne wrote a great many letters for Teresa at her dictation.  Teresa wanted Anne to receive the black veil and become a choir nun, but Anne begged to remain a lay sister, as she did not know how to read Latin which was required for the Divine Office and she said she would prefer to serve the community in practical ways than have the burden of administration.  Teresa allowed her to remain a lay sister but predicted correctly that she would eventually become a choir nun. Anne visited many monasteries with Teresa and helped her with the foundations of Villanueva de la Jara, Palencia, Soria and Burgos.  She was a dedicated nurse helping Teresa through her many health problems and attending to her lovingly in her last journeys.  Teresa died in Anne’s arms at Alba de Tormes in 1582.
After Teresa’s death Anne returned to Avila and in 1595 she went on the foundation of Ocaña.  Later she was one of the seven Spanish sisters who founded the Discalced Carmelite nuns in France.  They travelled to Paris in October 1604.  It was there that Anne received the black veil, becoming a choir nun so that she could go to Pontoise in January 1605 as the founding prioress. Only eight months later she was brought back to Paris to take up the office of prioress there and in May 1608 she went as the founding prioress to Tours where she remained for three years.  In 1611 she left France for the Flanders and in 1612 she founded a Carmel in Antwerp where she held the office of prioress for the rest of her life. She died on June 7th 1626. 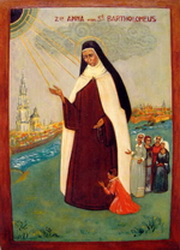 Anne was greatly loved by the people of Antwerp and after her death many miracles were attributed to her intercession; by 1632 more than 150 had been noted.
Anne wrote extensively after Teresa’s death, leaving her memories of Teresa containing both biographical details and insights into the spirit which permeated her foundations.  She had the joy of seeing Teresa beatified in 1614 and canonised in 1622. Anne wrote about the foundation and origin of Teresa’s reform in Spain and France, including the Defense of the Teresian Inheritance.  She also wrote her own autobiography, Spiritual Treatises, Conferences and meditations as well as numerous letters of which 665 are still extant.

Blessed Anne of St. Bartholomew was declared Venerable in 1735 by Pope Clement XII and beatified in 1917 Pope Benedict XV. Her Feast Day is kept on June 7th the anniversary of her death.