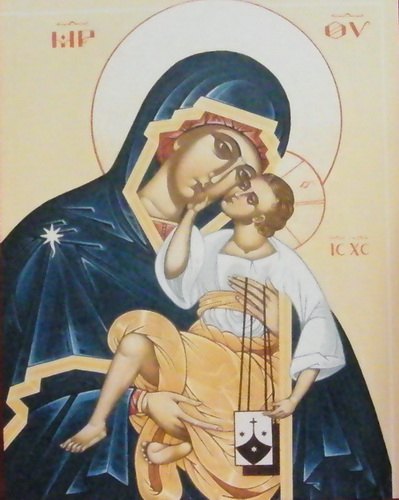 The Virgin of Carmel is one of the many titles of Our Lady, perhaps the
most popular and widespread in the church. But there is just one Virgin, who saw the birth of her son in Bethlehem, saw him growing up in Nazareth and then followed him along the dusty roads of Palestine. She was the one who, right from the beginning, knew how to be open to God’s word and listen to it, obedient to his will.

A group of crusaders, who had gone for the conquest of the Holy Land, chose this Virgin of all as their Patron, Mother and Sister. Attracted by the prophet Elijah, they decided to live a hermit life of allegiance to Jesus Christ in the foothills of Mount Carmel, in a narrow valley of
singular beauty in which rises the spring of Elijah. The valley is like an immense window looking on to the Mediterranean sea, through which enters the first joyful rays of sun each day. In this place of particular beauty, of immense tranquility and ringing solitude, they established a hermitage in the centre of which they built a chapel in honour of the Virgin Mary – the Virgin
of Mount Carmel.

When persecution arose, the few who managed to escape from it returned to Europe and brought with them, as the best heritage and spiritual richness of the Holy Land, devotion to Our Lady of Mt Carmel, who lavished help upon them in an evident manner, just as they were lavish in serving and venerating her and making her known. Among the particular helps given by Mary to her Carmelite children stands out the gift of the Scapular to Saint Simon Stock, when he insistently prayed to her:

From 1250, the Virgin of Carmel became Our Lady of Mt Carmel of the scapular, and no image of her will be found that does not bear
the scapular, which someone once called, “a furnace of love lit by a spark issuing from Mary’s heart.”

The scapular has become the Gospel of Mary, a memorial of her simple and gospel-like virtues, a reminder of her generous heart shedding graces and blessings. At the same time, she constantly reminds us that wearing it is a consecration to the Virgin of Carmel, carrying with it the commitment to live her simple and gospel way of life in service to the Church and humanity.

Popes, some of whom have worn the scapular, have enriched devotion to Our Lady of Mt Carmel with grace and indulgences; Institutions of all kinds and nations have proclaimed her Patron; those working on the sea have taken her as their particular patron and have found in her the best of navigators, the wave of the sea and rower, who always has her hands on the oars and with her the sea is calm and the heavens sweet.
P. Javier de la Cruz